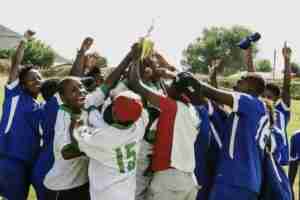 Not many football players can count Paris Saint-Germain, Olympique Lyonnais and Bayern Munich as clubs they featured for throughout their career, let alone play almost 200 times for their country and then throw in a degree from the States and working in the French Football Federation on top of that. But Laura Georges can claim just that.

The former French women’s national team star, who has enjoyed an illustrious football career, which now sees her perform the role of Secretary General in the French Football Federation, helping develop football, get more women involved in football and inspiring women not just in France, from her native home in the Caribbean but also abroad with FIFA and UEFA football development’s program, gave us time this week for this in-depth interview.

WSL Media: Ms Georges, tell us about how you got involved in playing football and your career in football up to now

Laura Georges (LG): I didn’t ever grow up dreaming of playing at the highest level. My father is an employee of the Palace of Versailles, (a historic landmark about 20km South-West of Paris) there were a lot of “soccer fields” around where I could play football.

At 12 years old I decided to join my local women’s football club, Paris Saint-Germain. I joined them because I wanted to play football for fun, not to play for the national team, I didn’t even know about the national team.  I was then invited to attend the National Institute of Elite Girls, (the women’s section of the famous Clairefontaine Academy) which had been set up by 1999 as Aimet Jacquet had the dream of adding the Women’s World Cup to the World Cup the men’s national team had just won. We would train Monday to Friday at the institute then I would go back to PSG at the weekend to play. I was at the institute for five years.

I was then presented with an opportunity when I received an offer of a soccer scholarship at Boston College. I took all the exams and got good grades and got in to Boston College where I spent the next three years getting my Bachelors’ degree in Communications.

Following my graduation from Boston College in 2007, I decided to make a return to France, where I joined Lyon.  They wanted to be Champions League winners. It was a good challenge after Boston College and I was also able to continue with my studies at the same time. I spent six years at Lyon, while also completing my masters in communications and marketing.

I won the Champions League twice, but I also got to the final twice but lost both times. I then returned ‘home’ to PSG and take my experiences from the US and at Lyon to PSG and then my former Coach from Lyon joined the team and I found myself out of the team one year after he came. I then moved to Bayern Munich to see if I still had the heart to play football, but then retired five months later, Meanwhile in March 2017, I was appointed General Secretary of the French Football Federation, so I had to make a choice.

WSL: You played for some of the biggest teams in Europe as well as playing for your country. How did it feel to have played at the highest level?

LG: It was a privilege to play at the highest level. To be a national team player is incredible as not many people get to play football for their country. I also know what it means to people back in the Caribbean for me to have played for the national team

WSL: How close were the women’s teams to their male counterparts at the clubs you played for, in terms of support, facilities and being around the male players?

LG: It depended on the culture of the club. At Lyon, we had the same facilities as the men, the girls train at the same training centre which has great facilities, eat at the same restaurant and when the men’s team won the championship, the men’s and women’s teams celebrated together. But it’s not the same at every club. However with the evolution of women’s football, women’s football gets similar support in terms of staff, video analysis and other things. In France, eleven of our twelve teams at the top level are clubs who have a men’s pro team

WSL: How do you feel, by being an influential figure in the women’s football, makes you a positive role model for other women both in football and away from football?

LG: I don’t feel like I have this level of impact. I get the chance to meet people in the women’s game and in the regions such as teams and referee’s and talk to them and it is a privilege to share, inspire and empower women in football.

WSL: Going back to your current role as Secretary General of the French Football Federation, what does it involve?

LG: It’s not the typical role of a Secretary General. We have a CEO who is responsible for the strategy and vision of the Association. I represent the President, both in France and internationally, sharing my experience in the regions and the territories to inspire women, and help encourage the women’s programmes. One of my main goal is to develop women’s referees For example in 2017, when I started the role, we had 860 female referees in the country and now we have 1,200 female referees.

I also have the opportunity to be an ambassador for FIFA and UEFA. In November I was in Lebanon with   FIFA for a football for school program and it was great to spend time with kids and play with them. I have been given a privilege to share and help support programmes in Latvia, Jordan, Georgia and other countries.

WSL: How far has women’s football grown since you started playing and what more can be done for it to realise the potential it has?

LG: It has gone through an evolution of mentality change. I could feel the difference here when the President Noël Le Graet came in 2011. He gave the national team as much support for the World Cup as the men’s national team in terms of preparation, facilities and travel. He supported programmes to develop women’s football. If you have leaders who want to give equal opportunities, then things are changing. The change comes when the leaders say ‘let’s go further’

To further grow the game we need good structure and good projects. We need to grow the base, too many people think about the top. It takes time but it is important to grow the number of the young players. They represent the future. At the same time the national’s teams need support even if they do not qualify for tournaments.

In general, we need more female coaches, managers, referees, and executives. They are the best advocates to grow the women’s game, but we need more men and women in our game.

We also need more support from the media. We don’t need quantity of content, but quality of content. The media have the power to tell stories about the development of women’s football, about the women and men who are making a difference for the women’s game.

WSL:What are your ambitions still in the game?

LG: It is hard to tell. In March it will be the election. After four years I don’t know whether I will stand again but I still want to empower and inspire men and women.

LG: Women’s football in Africa will continue to grow with good youth, coach, referees’ program and with more women at executive position.  I have followed women’s AFCON and the teams during the last World Cup in France. The teams have improved so much in the athletic aspect and in the tactics. I hope they will have even more support to continue to grow.

WSL: What would you say to women and girls in Lesotho who want to get involved in football either through playing or as coaches, referees or administrators?

LG: Go and listen to your heart. You can bring so much to your community. It’s important to be involved. I encourage men, women, girls’ players and non-players to be involved in clubs. They can make a difference. When you have a good heart, nothing can stop you.

They should dream big. Maybe start at club level but why not have a dream to work for the Association, CAF or FIFA?